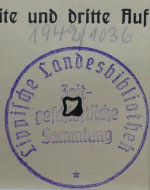 The book 'Jüdische Sagen und Legenden' by Bernhard Kuttner (1904) contains several references to provenance. Not only can the owner be identified, but an approximate reconstruction of the confiscation is also possible.

There is a handwritten dedication on the front endpaper:

Erna Eichmann was born in Salzuflen in 1903 as the daughter of Bertha Eichmann, née Grünewald, and the manufacturer Julius Eichmann. Together with her future husband Eitel Hamlet from Gütersloh and her parents she emigrated to South Africa in February 1937. She died childless in Cape Town in 1978.

The dedicatee Albert Wesel is presumably the cantor and teacher born in Breslau in 1880. Apparently Bad Salzuflen was one of his professional stations. In 1939 he emigrated to Shanghai where he worked as a Hebrew teacher. In 1947 he moved to the USA and died there in 1964 - only a few kilometres away from the address to which we sent the book signed by him.

When she fled to South Africa, Erna Eichmann left the book behind. We don't know exactly when it was confiscated. In 1942, at any rate, it was placed in the Lippische Landesbibliothek together with many other looted books in the so-called 'Zeitgeschichtliche Sammlung'. This is indicated by the stamp, the entry number and possibly also a shelf mark (J 5). To protect it from the air raids of the Allies, the 'Zeitgeschichtliche Sammlung' was stored in a salt dome in 1944. Documents from 1954 prove that the Lippische Landesbibliothek had transferred book holdings to the Jewish Trust Corporation. Mentioned here are books from expropriated Jewish institutions, but we can assume that there were also books from private collections. Obviously, these were then distributed to the Jewish Westphalian communities that still existed or had been reestablished. Since the book was contained in the estate of the (since 1963) Westphalian state rabbi Emil Davidovic, it seems possible that he had taken it from one of the community libraries. In some cases we can assume that Davidovic knew the owners of books or their descendants. The question whether he himself planned to return them must unfortunately remain unanswered. 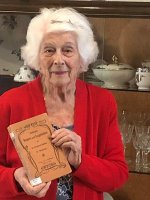 In July 2020 we were able to restitute the book to Erna Eichmann's 95 year old niece Ursula Mayer. She grew up in Bad Salzuflen, also emigrated to South Africa and now lives with her family in the USA.

For their assistance in identifying Erna Eichmann and finding the heirs, we would like to thank Mr. Arnold Beuke, M.A., City Archivist of Bad Salzuflen, Ms. Mundt of the (german) Federal Office for Central Services and Unsettled Property Issues and Anne Webber of the Commission for Looted Art in Europe.