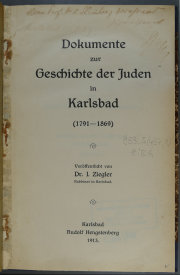 On the occasion of his 25th anniversary of service, Dr. Ignaz Ziegler, the long-time Rabbi of Karlovy Vary/Karlsbad, published the paper 'Documents on the History of the Jews in Karlovy Vary: 1791-1869' (1913).

He dedicated a copy of it to Professor Samuel Steinherz, who taught in Prague:

Samuel Steinherz (born 1857 in Güssing/Burgenland) had only turned to Jewish history in the 1920s as part of his studies. As a historian/mediaevist trained in Vienna and Graz, he had previously made a name for himself with the edition of papal nunciature reports from the Vatican. Knowing full well that as a Jew he had to fight against resistance in these disciplines, Steinherz completed his doctorate in 1894 parallel to his doctorate in law in order to be able to guarantee the support of his family. He had six children with his wife Sophie, née Kestel - they had been married in 1896 in the Vienna main synagogue, the Stadttempel. In 1901 the family moved to Prague, where Steinherz was appointed extraordinary professor of history at the German University. Seven years later he became full professor. It was customary for the longest-serving professor to take over the office of rector, and so Steinherz was to receive this honour in 1922. However, it was also customary that the office - if it fell to a Jewish professor - should be rejected by the latter. Steinherz did not follow this custom at first, and it caused strong protests in the predominantly German-national student body. After less than a third of the teaching staff showed solidarity, Steinherz bowed to the majority and resigned from the Rectorate in the spring of 1923. In the following years he devoted himself increasingly to Czech-Jewish history. One of the reasons was probably a request from the Lodge Praga of the Independent Order B'nai B'rith (Grand Lodge for the Čechoslovakischen state) to prepare an edition of the history of the Jews in Bohemia and Prague. In 1928 the Grand Lodge founded the Society for the History of the Jews in the Čechoslovakischen republic (Společnost pro dějiny židů v Československé republice), for which Steinherz has been publishing the yearbook ever since.

In July 1942, Samuel Steinherz and his wife Sofie (Žofie Steinherzová) were deported to Theresienstadt. Like many other scholars, Steinherz, who had become almost blind, tried to give life in the camp a touch of normality by giving lectures. It was probably the unbearable conditions on site that cost Steinherz his life on December 16, 1942 - it was his 85th birthday. Half a year later his wife Sophie died. Only their two children Anna and Rudolf survived the Shoa. Daughter Anna survived in exile in Great Britain. Anna, a doctor of German studies, was married to the mathematician Dr. Artur Winternitz.  Both had a son and a grandson, to whom we were able to hand over his great-grandfather's book in July 2020.

Son Rudolf managed to emigrate to Palestine with his wife Gertrud née Bloch (from Vienna).

In the search for descendants of Samuel Steinherz we were gratefully assisted by Sabine Loitfellner of the IKG Vienna and Anne Webber of the Commission for Looted Art Europe. Thanks also to Dr. Martha Keil for her cooperation while she was researching for the publication mentioned below at the same time as we were searching for Steinherz's heirs.

We are especially pleased to be able to contact Rudolf Steinherz' granddaughter Dr. Tal Yaar-Waisel, who is currently researching the family history in the environment of her grandmother Gertrud (Rachel) Bloch. She drew our attention to further published archival documents from the possession of her mother Susanna Waisel née Steinherz in the archives of the Ghetto Fighters' House. Among them are documents of the Bloch family as well as documents by and about Samuel Steinherz.

Link to the book in the Looted Cultural Assets database.