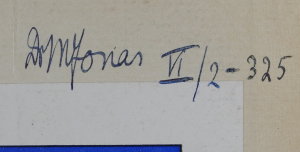 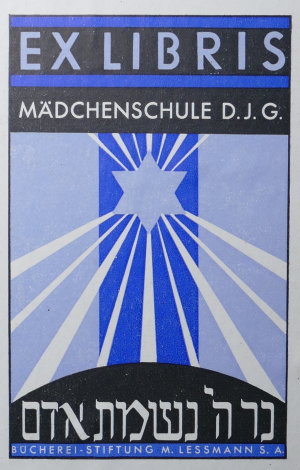 The hebrew motto (נר ה' נשמת אדם) refers to Mishle/Book of Proverbs 20,27a

The book estate of Rabbi Emil Davidovič, which is now located in Heidelberg’s HfJS, consists to a large extent of Nazi loot, which had been collected from various sources in the then so-called Protectorate of Bohemia and Moravia. The biographies of the owners whose names we find in the books allow in many cases to reconstruct the circumstances of plunder. The fact that many of these owners were inmates of the Theresienstadt camp allows the plausible conclusion that these were their books brought along. With regard to the persecuted and deprived inhabitants of Czechoslovakia occupied by the Germans, there are other ways in which the books came into our stock. However, in the book found here from the possession of Marie-Anna Jonas, the facts are directly documented for the first time, for a storage transport from the so-called Alt-Reich.

This is the handwritten entry in the “Quellenbuch zur jüdischen Geschichte und Literatur” (Frankfurt on the Main 1928). The digit sequence behind the name is the transport number assigned to Dr. Marie-Anna Jonas from Hamburg shortly before her deportation to Theresienstadt on 19 July 1942. Her husband Dr. Alberto Jonas (1889-1942) and her daughter Esther (1924-2016) were in transport too.

The family’s life paths are relatively well documented in Hamburg’s historiography, which is due to the commitment of many historians and historically interested people, but also the tireless willingness of the surviving Esther (married) Bauer to describe their own memories in detail. Reference should therefore be made to the secondary literature listed below.

Marie-Anna (Jonas, b.) Levinsohn was born in the East Prussian town of Fischhausen, but spent most of her childhood and youth in Königsberg. She initially intended to take up the teaching profession and spent some time in England and France in the course of her training. During the First World War, she was employed as a nurse. Presumably from these experiences, she decided to acquire the university entrance qualification and studied medicine in Königsberg (doctorate 1922/23). In 1923 Marie-Anna married the teacher and classical philologist Alberto Jonas, who grew up in Breslau/Wroclaw and who had entered service the year before at the Talmud Tora Realschule in Hamburg. In 1924, Alberto Jonas was appointed head of the Israelitische Töchterschule (Israelite Daughter School), where Marie-Anna Jonas exercised the function of the school doctor and took over representations for the scientific subjects.

With this school we may be able to connect the exlibris, which is also in the book:

The exlibris still raises some questions, as no further information has been identified about the foundation mentioned therein. The founder is the Hamburg publisher Max Lessmann (1859-1926), who, among other things, published the widely used Israelitische Familienblatt. The supplement Blätter für Erziehung und Unterricht (Journal for Education and Teaching), published in 1901, served as the mouthpiece of the Verband der Jüdischen Lehrervereine im Deutschen Reich (Union of Jewish Teacher Associations in the German Reich). In the interest of the Deutsch-Jüdischer Gemeindebund (German-Jewish Community Association, D.I.G. / D.I.G.B.) this association was established in 1895 to summarise the countless regional teacher associations that existed to date. Lessmann’s commitment to improving and standardising the Jewish education system is thus reflected not only in the publishing activity, but also in the above-mentioned foundation, with the help of which obviously girls’ schools in the German Reich could be equipped with books. We can only guess — and the spatial proximity makes it plausible that the Hamburger Israelitische Töchterschule had also been considered with books from this foundation. When this happened is still unclear. The addition s.A. mentioned in the exlibris behind Lessmann’s name (seligen Angedenkens/blessed memory) refers to a date of origin after Lessmann’s death in 1926. In 1942, the last of the degrading stages of the girls’ school ended and on 19 July it finally had to close it’s gates with the deportation of Marie-Anna, Alberto, Esther Jonas and many others.

We can assume that Marie-Anna Jonas from the school’s confiscated library had this and other books in their luggage. Did she write her transport number before leaving in the book? Or did she do that in Theresienstadt when she realised that private property in the camp was a luxury property? A few years ago, her daughter Esther could certainly have answered these and other questions.

Alberto Jonas died five weeks after his arrival in Theresienstadt. Dr. Irma Goldmann, who was continuously engaged in autopsy in the crematorium of the camp, certified bacterial meningitis as a cause of death in her section record (3 hours after the death of Alberto Jonas’). Marie-Anna Jonas boarded the train to Auschwitz with the autumn transports of 1944 and did not return. Esther was first taken to Auschwitz and later on to Mauthausen, where she experienced the liberation of the camp.

In July 2022, we were able to hand over the book with Marie-Anna Jonas’ possession note to her only grandson and son of her daughter Esther.