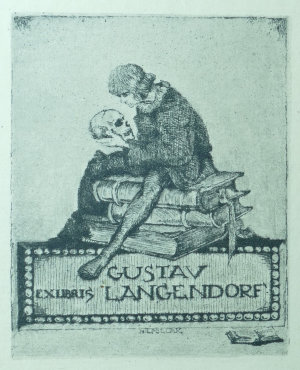 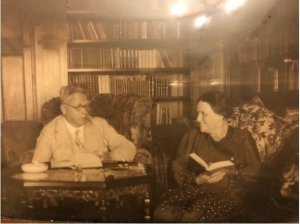 "The Jews are much closer to freedom than the German. They are slaves, they will break their chains one day, and then they will be free. The German, however, is a servant, he could be free, but he doesn't want to be.   Börne." [Transl.]

This and other quotations were prefixed to the text by the author Anton Kuh in his book "Juden und Deutsche", published in 1921. A hand unknown to us highlighted the quotation unmistakably. Markings in the running text of books are seldom of importance for provenance research, as they "merely" indicate the reader's engagement with the content.

In this case it is different. The traces we were able to trace from this and two other books reflect the fate of their owner and the other users. We identify the Prague merchant Gustav Langendorf - murdered in Treblinka in October 1942 - as the owner. Parts of his expropriated books, like this one, were presumably taken to the concentration camp Theresienstadt and distributed among the camp libraries. If we assume that the markings were made in Theresienstadt, the relevance of Ludwig Börne's vision - a good 100 years later - is obvious. It is a few pencil marks that allow a looted object to speak, or at least offer us an expanded scope for interpretation.

Above all, however, it is the names - handwritten or in the form of bookplates - that can bring us closer to the owners of the books. In the book "Juden und Deutsche" it is the name Langendorf, supplemented with a number. It was examined more closely as part of the provenance research in the library of the Hochschule für Jüdische Studien Heidelberg.

In another book (Otto Hauser, Geschichte des Judentums, 1921) we find a bookplate executed as an etching with the name Gustav Langendorf.  It shows a person sitting on a pile of books, bent over a skull in his hands. In the Sächsische Landesbibliothek - Staats- und Universitätsbibliothek Dresden (Saxon State Library - State and University Library Dresden), the colleagues discovered an identical bookplate during their search for looted property, together with the comparable name Langendorf, which also appears in Heidelberg (Max Brod, Weiberwirtschaft, 1917). Thus, we can still assign three books to one owner. They each come from acquisitions from the former Czechoslovakia, where since the end of the war large stocks of books have borne witness to the robbery of the Jewish population of the "Protectorate of Bohemia and Moravia".

Gustav Langendorf himself and many of his family members became victims of the German "Final Solution". His wife Olga died as early as 1939. Two of their four children emigrated to the USA in the 1930s and escaped the terror. The letters that Gustav Langendorf wrote to his children in the USA are the only material evidence still available to today's grandchildren. They date from the time of the German occupation of Czechoslovakia and deal with innocuous topics in order to escape censorship and punishment. Thus, only from a few fragmentary secondary sources can an attempt be made to trace Gustav Langendorf's life.

Gustav Langendorf was born on 9 November 1872, the youngest of seven children and the son of Klara, née Burger, and Simon Langendorf.  The marriage of Klara and Simon was performed in 1858 by the Chief Rabbi of Prague, Salomon Leib Rapoport. Before the First World War, Langendorf became a partner in the firm Schück, Katz & Co. Alexander Schück had the ambition to bring the production of bread in Bohemia to an industrial level and found a partner in Gustav Langendorf in the company "Odkolek, Aktiengesellschaft, Dampfmühle und Brotfabrik", which had been operating since 1912. Within this framework, not only were flours (and also fats) imported from overseas, but agreements were also concluded with local mills. A private connection was also created between the friendly families. Gustav's son Fritz married Alexander Schück's daughter Marianne. In 1920 Langendorf was president of the "Praga" Lodge of the Order B'nai B'rith. In this function he organised fundraising campaigns, for example for the asylum for destitute sick Israelites in Meran or the Israelite orphanage in Prague-Vinohrady/Weinberge. In the records of the Order there are also some titles of lectures that Langendorf had given and which reflect his varied interests ("On Henry Ford", "Cultural Currents in the East", "On Our Duty: To Have an Enlightening Effect on Mankind", "Josef Klausner's Book "Jesus of Nazareth""). With regard to the book by Max Brod found in Dresden, the descendants confirmed to us a great passion of the family for literature and music, but also specifically a preference for Max Brod. In 1937, son Fritz (murdered in Auschwitz in 1944) gave a lodge lecture entitled "Music of the last fifty years (with records)".

The Langendorf family owned several properties in Prague. In 1928 they settled in a prestigious property on the banks of the Vltava in Prague-Smichow. Shortly before Hitler came to power, Gustav Langendorf acquired an apartment building in Berlin-Charlottenburg - in 1941 he had to sell the property and the proceeds were confiscated by the German Reich. A recorded incident dates from September 1941, according to which Langendorf was questioned by the police on the grounds that he had covered his Star of David with his elbow. Even after the German invasion of the Sudetenland as a result of the Munich Agreement, Langendorf was sure that Prague would remain untouched - according to his niece's memories. In July 1942 he was deported penniless to Theresienstadt. We do not know whether he had the books found in Dresden and Heidelberg in his luggage, or whether they survived the end of the war in Prague depots via the incoming "Treuhandstelle". Three and a half months after his arrival in Theresienstadt, Gustav Langendorf was transferred to Treblinka and murdered there.

Since we were initially somewhat uncertain about the owner of the books, the bookplate itself helped us to establish the connection to Gustav Langendorf from Prague. At the bottom of the etching we find the name M. L. Pollak. After a false trail (Max Pollak) we found what we were looking for and were able to identify the artist Margaret(he) Leonie Pollak. Unfortunately, very little is known about her. She worked as an artist in Berlin and Munich and had a studio on Tyl Square in Prague-Weinberge. Her brother, the doctor Leo A. Pollak, lived in the same house. The Art Association for Bohemia organised, among other things, an exhibition of German women painters, at which Pollak was also represented. She married Emilio Gronich in Meran in 1931. Before the deportations from South Tyrol began, the couple fled to Switzerland with their son Luigi. After the end of the war, the family returned to Italy.

It is not only the artist's place of residence in Prague-Weinberge, where the Langendorfs also lived for a time, that makes a mutual acquaintance plausible. The fact that Langendorf's partner Alexander Schück was a generous patron of the Prague art scene also points to this. Schück's son Arnold was married to the sculptress Mary Duras, who was artistically active in Prague at the same time as Pollak.

We have been in stimulating contact with Gustav Langendorf's grandchildren for some time now and are pleased that we were able to hand over the books to them in December 2021.

The text presented here was already published in a slightly modified version on 14.0.2021 in "Retour - Freier Blog für Provenienzforschende". The corresponding source references can also be found there.

We would like to thank above all the family members in Peru and the USA for the warm contact and the very trusting cooperation. We would also like to thank the Landesarchiv Berlin, Mr Krákora from the archives of the Jewish Museum Prague and our colleagues at the SLUB in Dresden, whose publication (by Elisabeth Geldmacher) to the restitution can be found here.

Links to the Books in the Looted Culturals Assets database: