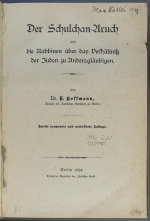 Max Katten was born in Bonn-Poppelsdorf in 1892. After graduating from high school in Bonn, Katten first studied economics, philosophy and oriental languages in Marburg. After two semesters he moved to Breslau, where he continued his studies at the local university and the Rabbinical Seminary. During the First World War he was employed as a security guard at the Danish border. In 1919 he could continue his studies. In 1922 he changed to the University of Gießen to prepare his dissertation with the Orientalist Paul Kahle. At the same time he passed his rabbinical examination in Breslau. After his doctorate in 1924 he took over the office of rabbi in Görlitz, where he worked until 1929. Afterwards he became district rabbi in Bamberg, succeeding Dr. F. S. Rülf.

After the pogrom night Katten was one of 170 arrested Jewish men who had been deported to Dachau. After six weeks of maltreatment he was released and soon after decided to flee to England. He did so in spring 1939 together with his two children. His wife Vilma followed him a little later. Vilma Katten was the daughter of Rabbi Michael Guttmann, who taught for several years in the Budapest Rabbinical Seminary and was its director until the Nazis closed the institution. Between these two offices he taught at the Breslau Rabbinical Seminary (1921-1938). Presumably Max Katten also met Guttmann's daughter Vilma there as a graduate.

Max Katten's mother Nanni was still living in Bavaria when she urged her son to leave the country. (Katten's father already died in 1901). Vilma Katten (Max's wife) persuaded her husband to take the children and fly to London in March 1939. Vilma then settled her mother-in-law Nanni into an old age home believing that she would be safe. This was not the case. From Regensburg/Nuremberg she was deported to Theresienstadt and died there a few months later. As cause of death on 05.03.1943 old age was attested.
It can therefore be assumed that the Germans came into the old age home and moved her along with other residents to murder them in Theresienstadt.
Vilma arrived in London - to join her husband and children - at the end of August 1939 just days before the start of World War II.

After the liberation of the Theresienstadt ghetto, Leo Baeck and other emigrated rabbis founded a liberal teacher and rabbi seminary in London based on the German model. Max Katten was one of the rabbis significantly involved in this.

Katten died in London in 1957 and survived his daughter Marianne, who had already died in 1952. He left behind his wife Vilma and his son Hans/John. In July 2020 we restituted Max Katten's book to his daughter-in-law and his three grandchildren in Great Britain and Israel.

How did the book end up in the estate of Emil Davidovic? Two hypotheses can be considered here:

Max Katten's son Hans, later John Katten (1928-2019) experienced the fire of the Bamberg synagogue and the arrest of his father when he was ten years old. In addition to his work as an architect, he later began to process his experiences in painting. We would like to thank his wife and his children for allowing us to show three of his paintings here. John Katten himself wrote about this painting with the title "My Story" (oil on canvas, 60x70 cm): 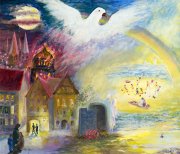 My father was the Rabbi of Bamberg, Germany, where the Jewish community existed for over eight hundred years.
On the night of November 9th 1938 I saw our beautiful Synagogue in flames with its noble tower illuminating the sky. I was ten years old and the sight never left me. The following night my father, together with all the other Jewish men of Bamberg, was taken to the Dachau Concentration Camp. These events I record in my painting showing the spires of the Gothic Cathedral of Bamberg behind the burning Synagogue.
My parents, sister and I managed to find refuge in England in 1939 where I spent most of my life. Both my parents and sister died in London – my painting includes their gravestones.
I married Brenda – we ae blessed with three children and eight grandchildren. We fulfilled our dream to come to live in Israel where the light is bright and the sun is strong. The painting shows us on the beach enjoying watching our grandchildren at play.
Just as Noah sent out the dove to confirm the flood had ended and saw a rainbow I also came from darkness to light. 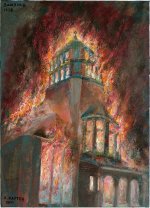 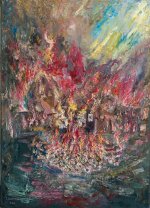 My sense of the Holocaust

In the search for heirs we were once again able to count on the invaluable help of Anne Webber from the Commission for Looted Art in Europe.

Zajdband, Astrid: German rabbis in British exile. From 'Heimat' into the unknown, Boston; Berlin 2016. (The corresponding dissertation with the title German Rabbis in British Exile and their influence on Judaism in Britain: http://sro.sussex.ac.uk/id/eprint/54352/1/Zajdband%2C_Astrid.pdf )