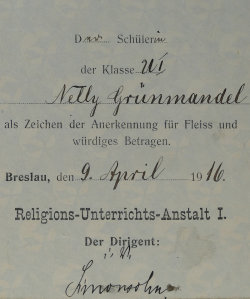 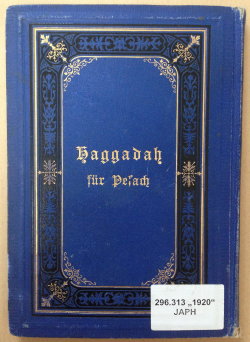 In 1916, the 16-year-old schoolgirl Nelly Grünmandel from Breslau received a small booklet as a gift from her religion teacher. It is a Haggadah with a glued-in dedication:

In December 1939 Nelly's mother died in Breslau and in 1942 her father was deported to an unknown place. We can assume that the Haggadah remained in Nelly's parents' house in Charlottenstraße in Breslau until the property was cleared by the National Socialists. Based on other provenances identified in the Heidelberg HfJS, it is obvious that the book - like many other Breslau books - was taken to Theresienstadt and put to use in the libraries there.

In December 2020, we were able to restitute the book to Chava's son in Israel.

We know that Nelly had three siblings: Siegfried (born 1903), Rosa (born 1907) and Selma (born 1896). The latter can be recorded as a school doctor in Breslau in 1934 and as a registered paediatrician in Cottbus in 1937. After emigrating to England in 1939, she continued her work there.

Nelly's father was a director of the Abraham Mugdan Synagogue in Breslau as well as of the Israelitischen Kranken-Verpflegungs-Anstalt und Beerdigungs-Gesellschaft. Through his work as a wine merchant, he seems to have achieved some prosperity. This is evidenced by a considerable number of letters of request addressed to him for financial support from the needy Jewish population of Breslau, especially from the years 1939 and 1940 (Convolute 1, Convolute 2)

The dedicatee of the book is the rabbi and religious teacher Dr. Max Simonsohn, whose death in 1936 is preserved in a lengthy obituary.

We are indebted to Anne Webber of the Commission for Looted Art in Europe for tracing the descendants of Nelly Schönbaum.

(Excerpt from the address list of the Breslau Jewish population, ca. 1933, including the place of residence of Nelly and Max Schönbaum)

Link to the full text of the first edition of this Haggadah from 1884.