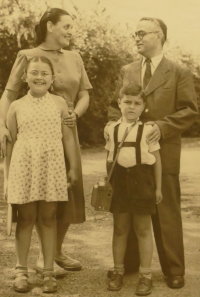 In 1988 the HfJS acquired the estate of the former state rabbi of Westphalia, Mr. Emil Davidovič (born 1912), who had died two years earlier. The majority of this estate consists of his private library and comprises about 6,000 volumes. Of these, approx. 2,500 volumes are to be examined for their provenance and suspicion of having been looted by the Nazis, e.g. due to their year of publication before 1945. The contents are mainly Judaica in German and Hebrew. Already when considering the acquisition of the collection more than 40 years ago, Dr. Uri Kaufmann pointed out in his expert opinion that the provenances were worthy of a separate investigation.

The Auschwitz survivor Davidovič was initially active as a rabbi in Prague, where he had already begun to build up his private library. Books from Davidovič's estate thus contain numerous ownership records of victims of the Nazi regime and liquidated Jewish and non-Jewish institutions (e.g. from Berlin, Prague, Breslau, Munich). According to the names, it was mainly prisoners from the Theresienstadt ghetto who had to hand in more than just their books upon arrival. The latter were incorporated into the libraries set up there. In addition, there were also book collections from dissolved Jewish institutions of the German Reich, such as the 'Hochschule/Lehranstalt für die Wissenschaft des Judentums' or the Breslau Rabbinic Seminary. All books from Theresienstadt were first brought to the Jewish Museum in Prague after the end of the war. It is possible that Davidovič had the opportunity to take books from these collections. As one of the few surviving rabbis in Czechoslovakia, he was to take over the care of some communities and the demand for literature was great. The fact that his estate contains numerous prayer books indicates that he did not take the books (only) for his own benefit.

However, the estate also contains books that were brought together directly in Prague during the German occupation. These originate mainly from Jewish institutions in Bohemia and Moravia, which had been dissolved by force. As in Theresienstadt, Jewish librarians were took over the cataloguing. The 'Jewish Central Museum' in Prague, renamed during the Nazi occupation, was the place where all cultural assets from synagogues and libraries were hoarded. The still preserved and meticulously kept entry lists provide information about the masses of objects that had to be processed while their owners were sent to the extermination camps. Almost all of the museum and library staff - we also find books from their possession in our inventory - were also murdered.

The library of the Jewish Museum Prague still owns the majority of these items. In addition, after the end of the war, large quantities of books were shipped to the USA and Israel, for example. Other holdings had to be destroyed due to mould infestation, and others were probably sent to antiquarian bookshops. This is indicated by abbreviations and prices which can be found in some books of the Davidovič estate.

The political course of Czechoslovakia after the end of the war was marked by anti-Jewish measures ranging from denuciations to the Stalinist 'purges'. It was not until 1962 that Davidovič and his family managed to obtain permission to leave the country, under the pretext of family reunification in South America. Instead, the family soon reached Dortmund, where Davidovič was promised the office of rabbi. Ten years later Davidovič became state rabbi of Westphalia and in 1979 he became chairman of the German Rabbinical Conference.

In his estate we also find Nazi looted property with Westphalian provenances. According to our current knowledge, these books originate from restitutions made to the Jewish Trust Corporation within the British Zone in the 1950s. The latter probably distributed the restituted books to the Westphalian municipal libraries, from where they probably became the property of Davidovič . In the case of some of the owners of the books, we can assume that Davidovič had known them himself or their descendants. Unfortunately, we can no longer determine whether he had intended to transfer the books.

Bušek, Michal: Hope is on the next page. 100 years of the Library of the Jewish Museum in Prague / Židovské Muzeum v Praze, Prague 2007.