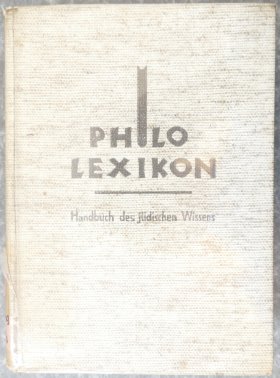 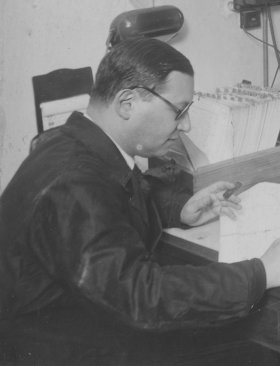 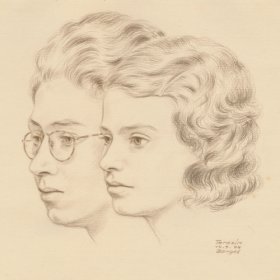 Drawing by Alfred Bergel of Hans Georg and Liselotte Friedmann, Hugo Friedmann on his birthday in Theresienstadt on 10 April 1944.

We found an unusual stamp as proof of ownership in the "Philo-Lexikon. Handbuch des Jüdischen Wissens", published in 1937:

Possession notes are primarily used to get back a book that has been lent, for example. In addition, they often serve to communicate with the outside world. How does the owner define himself? What does he want to say about himself? Some add their profession as an indication, or their academic degree, for others symbols (e.g. a Star of David) are an expression of their own identity, their profession or personal interests.

Precisely because of its matter-of-fact sobriety, this stamp bears witness to the sinister state-driven dehumanisation of individuals - in this case, Jews.

The owner of the book, which aims to impart universal knowledge to the reader, is reduced to the details that the Nazi authorities had granted him to express his personality. These are the compulsory name Israel, the place of his residence and the identification number, which corresponds to the ID of a present-day identity card.

But the ID number also helped us to clearly identify Hugo Friedmann among several Viennese persons with the same name in the corresponding period.

Like many other owners of books from the holdings of the HfJS library, this Hugo Friedmann was also imprisoned in Theresienstadt. He was born in 1901 in Vienna, where he graduated from school in 1920 and subsequently studied law and art history. After his marriage to Hilde, née Kubie, he founded the "Trifa" textile factory. His great interest, however, was art and the proceeds from the business enabled him to build up a collection, with a focus on Japanese and Chinese arts and crafts, European painting and early printed works. Friedmann was active at the Vienna Jewish Adult Education Centre as a lecturer for the art department, worked as a curator at the Jewish Museum and guided visitors through the Kunsthistorisches Museum on a voluntary basis. He was also actively involved in the Jewish Community.

Hugo and Hilde's children Hans Georg and Liselotte were born in 1928 and 1932. A few weeks after the so-called "Anschluss" of Austria to the German Reich, the Friedmann family also had to disclose their assets to facilitate the authorities' act of expropriation.  In 1939, the company was aryanised and the family had the art collection, household effects and an extensive library transported to Trieste. Packed into several lift vans, the objects were stored at the harbour and the Friedmann family planned to take them with them when they left for overseas in the near future. However, they did not emigrate and their belongings were confiscated by the Gestapo in Italy.

The entry in the Vienna birth register, according to which Hugo Friedmann had to take on the additional name Israel, dates from 29 April 1939. Two years later, the family's assets went to the Nazi state, and soon afterwards they had to vacate their house in order to find accommodation in a smaller flat. On 9 October 1942, Transport 45 (Train Da 525) took Hugo Friedmann, his wife Hilde and their children Hans Georg and Liselotte to Theresienstadt. Upon arrival, it was the transport number to Theresienstadt that was to identify the inmates in the future. (According to H. G. Alder, the transport number replaced the previous identification number only in the course of the so-called city beautification in 1944).

Hilde Friedmann was employed in the post office during her imprisonment, the two children were placed in the children's home and Hugo Friedmann became a librarian in the ghetto central library in 1943. His later co-worker in the library, Käthe Starke-Goldschmidt later clarified Friedmann's penchant for books: "...to his wife's horror, he had brought nothing but books [to Theresienstadt] instead of suits and laundry in two suitcases." We can assume that one of them was the book discussed here.

Like many others, Friedmann tried to provide a little distraction from the catastrophic everyday life in the camp through cultural events in the "leisure activities" (Freizeitgestaltung) department or in the "Manes group".

The surviving statements about Hugo Friedmann reveal his exemplary manner in which he had successfully and knowledgeably managed the Central Library. Philipp Manes praised his organisational talent and his commercial sense of practice: "A quick, hands-on worker. You should have seen him sorting when 30,000 volumes arrived one day and were piled up in two rooms. There he was in his element and was able to rescue many a bibliophile treasure from the jumble." Fortunately, a description of the library written by Friedmann has been preserved, as well as an "Guide to the Art Treasures in the Theresienstadt Ghetto". As with the stamp found in the book, in both typewritten documents he gives his authorship as Hugo Israel Friedmann. The mention of the additional name was not customary in the camp and therefore this can be interpreted as a confession; presumably less to distinguish himself from the "Protectorate Jews" who were exempt from this duty, but rather as an expression of a Zionist sentiment.

His activity in the library as well as his relative notoriety protected Friedmann to a certain extent from being included in the outgoing transports to Treblinka and Auschwitz. In the autumn of 1944, the protection for all "privileged" persons was lifted and Friedmann tried in vain to appeal to Benjamin Murmelstein to have the transport order rescinded.

On 28 September 1944, he boarded the train to Auschwitz. In a letter of thanks that he sent to Philipp Manes shortly before, he suspected that he was part of the "1st workers' transport[s] in the "direction of Dresden"". A month later he was indeed transported to a labour camp, namely Landsberg/Kaufering, where he died in early 1945. Liselotte, Hans Georg and mother Hilde had to follow Hugo to Auschwitz a month later, and Hans Georg subsequently to Landsberg/Kaufering. They all did not survive the end of the war.

In 1946, Friedmann's colleague Käthe Starke-Goldschmidt contacted Hugo's parents Joab and Gina, who were able to emigrate to Colombia, and described to them in letters the circumstances in Theresienstadt and the family's fate, which was still unclear at the time. As late as 1949, the grandparents were still actively searching for their grandchildren.

Before his deportation from Theresienstadt, Friedmann Starke-Goldschmidt handed over various documents, watercolours and drawings, which are now kept in the Altona Museum and are referred to as the so-called "Theresienstadt Collection". Among them is a drawing of Liselotte and Hans Georg, which the painter Alfred Bergel gave Friedmann for his birthday in 1944. Their paths presumably already crossed in Vienna, and in Theresienstadt they both spent time together in a sickbed due to typhoid fever.

Personal items have also been preserved from son Hans Georg. After he was barred from going to school by the National Socialists in 1938, he wrote several adventure novels. The family's nanny took them before the Friedmanns had to leave Vienna for Theresienstadt. The hero of the stories is called Tom Lasker, a detective in the fight against injustice. It is not surprising that some of the content reflects the boy's current situation.

In January 2021, we were able to give the book, which had been identified as looted property in our library, to Hugo Friedmann's nephew.

During the research on the Friedmann family, we were supported in particular by Margot Werner MSc of the Austrian National Library and Heide Manhartsberger-Zuleger. Thanks are also due to Mag. Dr. phil. Michaela Raggam-Blesch, the staff of the memorial sites Dachau, Terezín, Beit Terezin, the Altona Museum, the Wiener Holocaust Library and the Austrian State Archives.

Friedmanns activities in the "Manes group":

Eyewitness report on Transport 45 from Vienna to Theresienstadt:

Permission slip for Hugo Friedmann from Theresienstadt / Permission to leave the accommodation after 8 pm:

Exhibitions on Hans Georg Friedmann and his family: