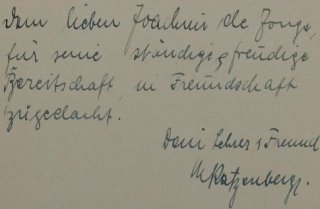 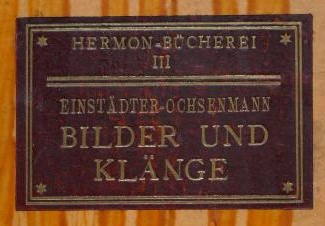 The presentee is Joachim Max de Jonge from Weener, a pupil at the Jewish primary school in Oldenburg at the time the book was presumably handed over. Joachim Max was the son of Jeanette de Jonge, née Heß and Jakob de Jonge, both natives of Weener. His father Jakob de Jonge ran a machine factory in Weener. The family faced immediate reprisals by the Nazis from 1933 onwards. Jakob de Jonge was detained in the concentration camps Börgermoor, Lichtenburg and after the November pogrom in Sachsenhausen. The family had moved to Oldenburg in 1935 or 1936. Joachim Max as well as his sister Ruth and brother Heinrich sought protection in the Netherlands in 1937 and 1938. At the beginning of 1939, after Jakob was released from prison, his parents followed them into exile. The Wehrmacht's invasion of the Netherlands forced the family into hiding. They found shelter in the attic of a house in Leeuwarden. While the sister Ruth was active in the resistance struggle, the rest of the family stayed in hiding until the end of the war. The owner of the house provided the family not only with food but also with wood and tools. The family made toys and everyday items there and used them to supply other Jewish children in hiding. (See the links below to Yad VaShem, where some of these objects are on display).

Joachim Max remained in the Netherlands after the end of the war, where he died in 2008.

The dedicatee is the teacher Moses Katzenberg (born in 1912 in Guxhagen near Kassel). From 1937 until his emigration to England in 1939, he taught at the newly founded Jewish primary school in Oldenburg. We can assume that the handing over of the book took place during this period. Katzenberg died in London in 1980.

The book was last in the private library of Emil Davidovič, who was the State Rabbi of Westphalia until his death in 1986. This library was acquired by the Hochschule für Jüdische Studien Heidelberg in 1988. Several other north-west German provenances and few indications so far suggest that this and other books came from a restitution fund that had been given to Jewish communities in the area of the British occupation zone in the 1950s and to which Davidovič had access.

In May 2021, we were able to hand over the book to the widow of Joachim Max de Jonge. Shortly afterwards, she decided to leave the book to our library in memory of her family's fate, which we greatly appreciate.

For the mediation to de Jonge's family in the Netherlands we would like to sincerely thank Mrs. Susanne Bracht, director of the memorial Ehemalige Jüdische Schule Leer.

Online exhibition of the toys made by the de Jonge family in the Dutch hideaway:

From the online version of the memorial book of the city of Oldenburg:

Newspaper clipping about a student project on the de Jonge family:

Link to the book in the database Looted Cultural Assets