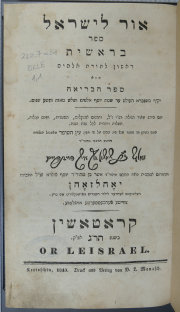 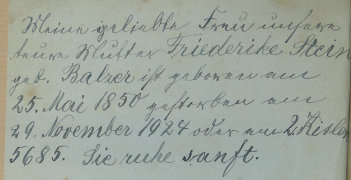 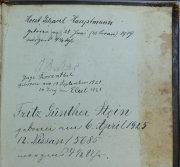 Books in which family events are recorded have a special value in the household. Especially Bible editions were and are used for this purpose. The memory of the recorded events and persons is to be secured in its continuance together with the preservation of the holy scriptures. This is also the case in the two preserved volumes of a multi-volume Bible edition. Besides the Hebrew text, it contains an Aramaic and a German translation in Hebrew script as well as the commentary by Rashi.

In volume 1, Sefer Bereshit (Book of Genesis), the following entry can be found:

The research revealed that the two volumes can be assigned to one family. The books come from the possession of the married couple Michael Stein and Friederike, née Balzer. The couple moved from their hometown Löbau/Lubawa in West Prussia to Bielefeld in 1914. At first they lived in the estate of their son-in-law Willy Hauptmann, husband of daughter Rosa. The two other children of Michael and Friederike - Betty and Jakob - also lived with their spouses in Bielefeld. The dates of birth of their children can now be found in the preserved volume 4: Horst Schaul Hauptmann, son of Willy Hauptmann and Rosa née Stein; Inge Rosenthal, daughter of Paul Rosenthal and Betty, née Stein; Fritz Günther Stein, son of Jakob Stein and Hildegard, née Cohn. Presumably the first entries were made by Friederike Stein and after her death in 1924 Michael Stein continued the documentation of the family history until he too died - just 4 weeks after the last entry - in May 1925. The couple did not experience the early death of the aforementioned grandson Fritz Günther in 1938, nor did they experience that his 15-member Bielefeld family was deported to Riga in 1941. With the exception of Inge Rosenthal, who is mentioned in the book, all family members were murdered. She survived due to a further deportation via Hamburg to Kiel, where shortly before the end of the war the Swedish Red Cross enabled her to cross over to Sweden. From there Inge Rosenthal emigrated to the USA, where she married Werner Friedeman(n), who had also emigrated, in 1947. In 1964, she made a shocking testimony about the conditions and the people involved in Riga before the German consul in Cleveland, Ohio, (see literature reference).

The Horst Schaul Hauptmann, Inges cousin, mentioned in the book, was obviously planning to leave for Palestine. In preparation for this, the hachshara institutions were set up for young Jews. There they completed agricultural or craft training, which made it easier for them to obtain a visa for the then British Mandate of Palestine. Initially, Horst Schaul was in the Dutch Werkdorp Wieringermeer for training, and later he probably worked as a trainer at the Landwerk Ahrensdorf until 1943, when he was deported to Riga - according to another source, to Auschwitz - and murdered.

Fortunately, we were able to locate Inge and Werner Friedeman's daughter in the USA and send her the two volumes from the family collection in October 2020. We are very grateful that she allowed us to digitize the very rare volumes to keep them available for research purposes.

As with the other books of Westphalian provenance in the Davidovic estate of the HfJS Library, we can assume that these are volumes confiscated by the Nazi authorities and distributed to Jewish institutions in Westphalia after the end of the war.

Dr. Jochen Rath, director of the city archive in Bielefeld, was extremely helpful in researching the family history. We would like to thank Ms. Anna Rubin from the Holocaust Claims Processing Office, New York, for her assistance in identifying the descendants. We would also like to thank Heidelberg University Library for producing the digital copies and making them available.

Link to the two digitized versions

Link to the books in the database Looted Cultural Assets